The Finnish game industry was also present at Slush!
Neogames organised the Games Networking event in association with inMobi at Slush on the 11th of November. The event focused on the most topical trends in mobile gaming: in-game advertising, viral video sharing and new ways of establishing “genres” in gaming. The event was hosted by Sonja Ängeslevä (board member of Neogames). The speakers in the Games Networking session included: Jiri Kupiainen (Shark Punch), Jussi Pullinen (Tree Men Games), Erik Pöntiskoski (Dodreams), Jussi Laakkonen (Unity) and Lasse Seppänen (PlayRaven). 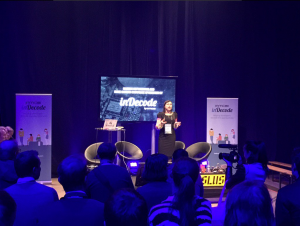 Photo: Ryan Goeden, inMobi
Here’s a brief summary of the talks:
Shark Punch: Jiri Kupiainen
On Monday, Shark Punch launched the next stage of Playfield.io, where they focus on helping developers reach the right audience and get the attention they deserve, build stronger communities around their games and communicate with their fans. Shark Punch is inviting all developers (with a special focus on PC) to participate in our beta so that we can make game discovery and communities better for everyone.
Tree Men Games: Jussi Pullinen
With zero marketing budget Tree Men Games kept PAKO growing and monetizing successfully for over a year. During the first year of PAKO, the development team tripled the amount of maps and added new features and modes to the game. With its ups and downs in the charts, there were a few actions that paid off. Download spikes came from regular free updates and featuring when PAKO was added to the AppStore collections or promoted by popular YouTubers. Lowering the price (PAKO is a PPD) and responding to players wishes worked for them also.
PlayRaven: Lasse Seppänen
PlayRaven’s user acquisition strategy is to efficiently position and brand their games. They want to be different from the mainstream mass of apps. Their target is to create a “Coca Cola moment” and create a whole new category for app stores. This way the existing competition would be irrelevant, because they are not really competing with an existing market, but instead the aim is to create a whole new category. For PlayRaven’s SpyMaster they did it by owning the “Spy games” or the “Secret agent games” sub-/ temporary categories.
Dodreams: Erik Pöntiskoski
For Dodreams, ad revenue is a part of a fair free-to-play model. In their game Drive Ahead!, the players can choose how they unlock new content. Rewarded video ads are very popular among players and generate 2/3 of our the revenue. When choosing an ad network, it’s important to consider issues beyond revenue. Dodreams played lots of games and talked with other developers. They chose Unity ads and Vungle, because of the quality of the ads, global coverage and their responsive account managers & tech support.